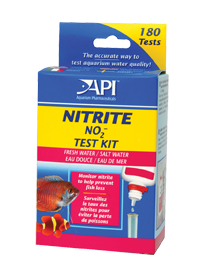 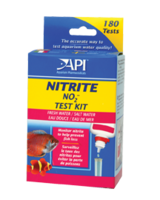 Toxic nitrite is produced by nitrifying bacteria in the biological filter as it breaks down ammonia.

This kit tests for harmful nitrite and measures levels from 0 to 5.0 ppm.

Q: What is nitrite?
A: Nitrite (NO2-) is produced in the aquarium by the biological filter. Beneficial bacteria in the biological filter convert toxic ammonia into nitrite (also toxic). The biological filter then converts nitrite into nitrate (NO3-). Testing for the presence of toxic nitrite is essential, so that once detected, steps can be taken to remove it. Otherwise, nitrite in the aquarium will prevent fish from carrying on normal respiration. High levels of nitrite quickly lead to fish death. Even trace amounts of nitrite stress fish, suppressing their immune system and, thereby, increase the likelihood of disease and subsequent fish loss.

Q: What causes a nitrite problem?
A: In a new freshwater aquarium, the nitrite level may surge to 10 ppm (mg/L) or more, and then fall rapidly as the biological filter becomes established. The nitrite will be converted to nitrate. This process may take several weeks. In an established aquarium, the nitrite level should always remain at 0 ppm (mg/L). The presence of nitrite indicates possible over-feeding, too many fish, or inadequate biological filtration

Get updates about specials, announcements, and seasonal sales
Sign Up Now