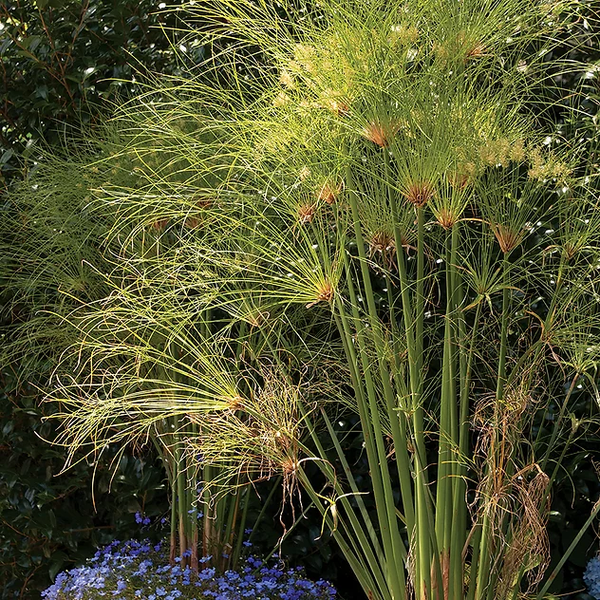 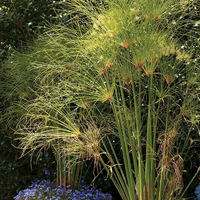 Sorry, this item is out of Stock

WE WILL BEGIN SHIPPING PLANT ORDERS FOR: ZONES 9-10 BEGINNING THE END OF FEBRUARY/FIRST WEEK IN MARCH

Also known as Egyptian paper plant. Attractive 10" heads of needle-like foliage sit atop stiff triangular stems which grow up to 12' tall. This eye-catching evergreen grass is extremely fast growing in spring, and quickly reaches an impressive height. It should be considered an annual where temperatures drop below freezing, or a perennial in warmer climates.

How to Grow Papyrus

The plant is called umbrella plant because it has a grass-like habit with sprays of foliage at the top of the stems. These sprays of foliage radiate out like the spokes in an umbrella. Papyrus can grow up to 10 feet tall from rhizomes. The stems are rigid and triangular and have white pith inside. The pith is the source of papyrus paper.

Papyrus has no frost tolerance and should be moved indoors for the winter.

Papyrus grass is easy to grow. It prefers full sun but can also be raised in partial shade.

Papyrus is usually planted by rhizomes in moist, fertile soil in pots and then submerged in an aquatic environment. It can also be planted directly into 3 feet of muddy substrate to hold the heavy stems upright. The plant needs to be kept moist, if not submerged.

Papyrus seeds do not readily germinate and can take a month or more to sprout. Even in their native conditions, the plant does not easily spread by seed.

Mulching in zone 8 can help protect the tender roots but the foliage will likely die back in winter.

How to care for Papyrus in winter:

Cyperus Papyrus, with fluffy, feathery heads that grow on stalks reaching 8 feet tall, has a visually striking effect when planted in ponds or water-filled containers. The plant belongs to the sedge family and also goes by the name of bullrush. This moisture-loving plant grows along the banks of the Nile in Egypt; in U.S Department of Agriculture Hardiness Zones 9 through 11, it can thrive in your water garden during the winter months.

Ground-grown papyrus dies back in colder areas when frosty weather arrives, but if your papyrus grows in a container, you can take it indoors to protect it until spring.

Get updates about specials, announcements, and seasonal sales
Sign Up Now