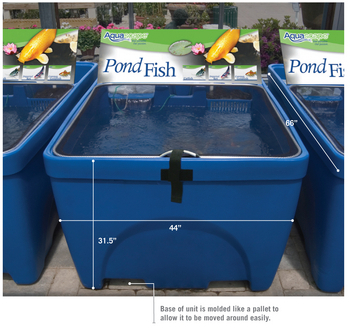 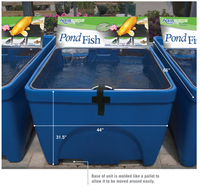 $127.98
No more jimmy-rigging tubs and filters, and no more worrying about the spread of disease.
System:
Features:
Includes:

Read through this entire owners manual before adding fish!

Remember…start out with conservative fish loads and gradually increase over the course of several weeks.

Even though the Fish Retailing System is designed to handle large biological loads, steps must be taken in order to not overload the system initially. Since it generally takes 6-8 weeks for the cycling process to take place, it is crucial that the initial fish load be kept to a minimum.

After the cycling period has finished, more fish can be added to the system, but at a gradual pace. You DO NOT want to add too many fish at one time. For example, if you cycled the system with 12 six inch fish, you do not want to add an additional 20 six inch fish the next day. The addition of more fish will take time as the bacteria bed of the FRS matures.

To put it simple, the longer the system has fish in it, the more beneficial bacteria that will grow, resulting in an overall greater fish load.

The maximum amount of fish that will be able to survive in the FRS is going to be dependent on the age of the system and the regularity of maintenance (ie; water changes, replacement of carbon, changing of the UV bulb, etc).

So very easy to maintain & clean!!! I use them to sell my koi at the nursery.