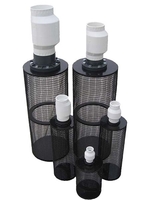 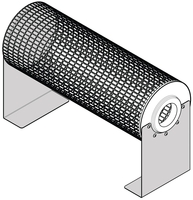 For high volume pumping applications these heavy duty pump intake screens are the answer! For most high volume pumps these filters are a much better choice as they will allow fine particles through so screens will not plug up as often yet will still keep out large objects such as sticks, fish and weeds.

The PIf2 inline filter, Is this sufficient to prevent clogging the nozzle or damaging the motor?

The PIF2 intake filter is designed to stop large debris (sticks, leaves, fish, etc), this is a critical first step in protecting the customer's pump and helping prevent a clogged nozzle. The final step in pump protection/screening is actual built into the pump itself. Underneath the lid in the pump's "priming pot" (near where the suction line is connected) is a second smaller debris basket/screen. This finer mesh debris basket is designed to stop smaller particles that can cause issues. This is not to say weird things can't happen and debris couldn't somehow get to the pump's impeller or the nozzle, but the majority of the time these (2) screens provide more than adequate protection for the pump and prevention of a clogged nozzle.

I had called the factory with the phone number you provided to get some details on the check valve that was coming in today. I asked about whether the valve should be installed vertically or horizontally. I was told that the orientation of the valve made no difference and that it would work in any position. Then the valve arrived later and I found the note embossed on the side of the valve which said it should be vertical. Why would the valve manufacturer indicate it should be installed vertically when I was told it really didn't matter?"

The valve does not have to be installed vertically. That note indicates that if it IS installed vertically that it should be oriented that way. As I discussed with him, it is a one way flapper on the inside, the only way it wouldn't work is if it was installed vertically in the opposite direction it is marked, and I cannot picture a properly plumbed situation where that would be an issue. The check valve should be attached to the PIF2 filter, so the only way to do it wrong is to put it backwards, or have it such that the filter is vertical and the flow is going downward, which would be very odd. Installed horizontally it doesn't matter the orientation as long as the flow direction follows the arrow on the valve.